Many people would agree that maintaining strong bones is an important thing to do, but very few of them know how to do it. They may know that having sufficient amounts of calcium and Vitamin D in the diet is important, but they may not realise that lifestyle plays an important role as well.

ALCOHOL
Having a cocktail or two after a long day at work is a good way to unwind, but what happens when it turns into excessive drinking? Not only is such a level of imbibing bad for important organs such as your heart, brain and liver, it could have negative effects on the bones as well.
With excessive alcohol intake, the calcium balance is affected with the disruption in production of Vitamin D which is important for calcium absorption. In men, drinking too much alcohol tends to reduce the amount of testosterone produced, thus decreasing the amount of osteoblasts, which are important for bone formation. In fact, studies have shown that drinking more than two units of alcohol per day can increase the risk of breaking a bone in both men and women.
To keep your bones strong, it would be good to reduce your alcohol intake and drink in moderation.

SMOKING
You always see the protagonists in the movies casually light up a cigarette after a dangerous mission to calm their nerves, but what they never show you are the adverse effects of this bad habit! Besides being linked to respiratory problems, smoking is also associated with a higher risk of cancer and accelerated bone loss. And if you started young, chances are that you wouldn't have attained optimal peak bone mass, and may have a smaller than normal skeleton. For women, smoking is extra-harmful, especially after they reach menopause, as it will accelerate bone loss and make their bones weaker.
In general, the cessation of smoking will help to retain bone mass. But quitting smoking isn't easy, so it may be a good idea to seek professional help. Break the habit one step at a time and, pretty soon, you'll be on your way to having stronger bones!

SOFT/CARBONATED DRINKS
There's nothing like an ice-cold bottle of soda on a sweltering day to cool you down. Although these sugar-laden, carbonated concoctions are inexpensive, the true price we pay comes later when they are consumed excessively. Although there's no direct link between bone loss and these refreshments, they are replacing the milk or other nutritious drinks that we could be including in our daily diet instead think about that!

CAFFEINE
Drinking coffee can give us an energy boost, especially when we're required to wake up early in the morning and need an instant shot in the arm!
This instant boost is stimulated by the caffeine in the coffee. However, consuming excessive amounts of caffeine-containing beverages, such as coffee, may affect our calcium balance and, potentially, our calcium absorption.
However, the good news is that we can minimise calcium loss by adding one to two tablespoons of milk to complement our calcium rich diet! So if you can't live without your cup of Joe in the morning, have it with a splash of milk to offset the potential loss of calcium arising from the caffeine-containing beverage you'd be drinking.

We understand that your lifestyle habits could be entrenched by now, so quitting is likely to take some effort. In the meantime, try to retain the calcium in your body through the best way possible: drinking enough milk as part of a balance, varied diet. Two glasses of Anlene a day will provide enough calcium to meet your daily need. 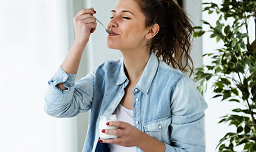